The Royal Pavilion at Brighton is one of the most eccentric, decadent places to visit. It is testament to the personality of the Prince Regent, later George IV, and remains a spectacle of opulence and regency style today.

The town of Brighton

Brighton is a mere 50 miles from London, making it a destination for city folk both past and present. During the eighteenth century, Brighton was becoming popular as a resort town where one could take the fresh sea air. People went for their health, and to socialise, and by the end of the century the tow n attracted the rich and famous. Brighton’s population grew significantly, from around 3,620 inhabitants in 1786 to 40,634 in 1831. A key to Brighton’s development was George’s influence as his presence encouraged business, enterprise, sociability and expansion.

George IV and the Development of the Pavilion

George IV, as Prince of Wales, first began to lodge in Brighton from the 1780s. At first, he had a modest house known as the Marine Villa, designed by Henry Holland. By the time he became the Prince Regent in 1811, following the decision that his father King George III was no longer fit to rule, he had plans for a much bigger, more extravagant palace. 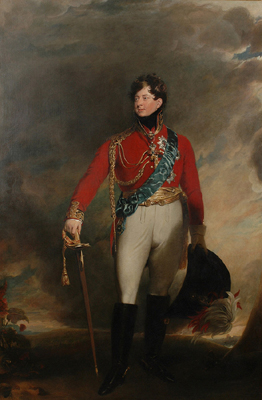 George was an entertainer and lived an extremely extravagant lifestyle. He needed a bombastic demonstration of his taste, wealth and power, in addition to being large enough to host all of the people and events he had planned. As such, in 1815 he commissioned his favourite architect, John Nash (responsible for much of the design of Regency London), to create his vision.

The Royal Pavilion: style and contents

Chinoiserie had become a popular style from the earlier half of the eighteenth century. From the rococo to Chippendale’s designs in his Directory, chinoiserie was in. George IV took chinoiserie and orientalism to a theatrical scale, using elements of Chinese, Indian and Japanese design. Of course, it was a Western interpretation as he had never actually been to these places…but the Royal Pavilion is a prime example of the fascination with the exotic. By drawing inspiration from foreign lands, George IV was demonstrating his mastery of the globe.

The Music Room at the Royal Pavilion, photo courtesy of Brighton Museums

The East Front of the Royal Pavilion, from Nash’s Views

Below are a selection of pieces available that really channel the sense of the Royal Pavilion. Eighteenth and Nineteenth century objects taking inspiration from ‘exotic’ foreign styles, with influences from Empire and beyond – take a look and let us know what you think! Or, click here to see our Georgian Furniture Style Guide.

And if you would like to visit the Royal Pavilion, which has been fantastically conserved to retain George IV’s rather amazing fingerprint, it’s open all year round!