The Vienna Secession: in a Nutshell

The Vienna Secession: in a Nutshell

“To every age its art, to every art its freedom.”

The quote above is written above the door of the Secession Building, designed by Joseph Olbrich in Vienna in 1897. The building, purpose-built to hold exhibitions of the ‘new arts’ of modernity, was designed as a sort of visual manifesto of the Secession artists. It was a symbol of modern ideas, aesthetic principles and creativity.

A group of artists had made a decisive break from the traditional fine arts and its institutions in Vienna. The two most dominant of which were the Akademie de bildende Kunste (the Academy of Fine Arts) and the Kunstlerhaus Genessenschaft – a private exhibiting society founded in 1861. Similarly to London, Paris, Rome and other artistic centres in Europe, the artistic world had become restrictive and continued to favour the academic painting and naturalism of the past. In consequence, new arts were often rejected by the exhibitors in favour of the old. The Secession Movement aimed to provide a space and forum for modern arts, and was hugely influential in its fleeting moment of impact. The Secessionists were designers, architects and artists who embraced contemporary artistic movements. Within this group were individuals such as: Gustav Klimt, Egon Schiele, Koloman Moser, Josef Hoffmann, Joseph Maria Olbrich and Alfred Roller. When the Vienna Secession was formed, in 1897, Klimt was placed as President (unsurprisingly, as he already had a well established reputation), and they began to hold regular exhibitions at their headquarters, the Secession Building.

They also created a journal, Ver Sacrum, that was first published in 1898.   The journal featured drawings and designs in the ‘Jugendstil’ (Austrian Art Nouveau) style along with literary contributions from distinguished writers from across Europe. In the first issue, they stated:

‘We desire an art not enslaved to foreigners, but at the same time without fear or hatred of  the foreign. The art of abroad should act upon us as an incentive to reflect upon ourselves; we want to recognise it, admire it, if it deserves our  admiration; all we do not want to do is imitate it.’ The artists of the Secession Movement, therefore, wanted to create new, modern art, relevant and responsive to the world around them.

The Movement and its Influences

Possibly the most interesting characteristic of the Vienna Secession, as an artistic movement, was that it had no uniform artistic or aesthetic style. It was a cross pollination of ideas and its members sought inspiration from a multitude of sources, such as: the Arts and Crafts Movement of William Morris, folk art of the Austro-Hungarian Empire, Japanese art, Impressionism, the Glasgow School (particularly Charles Renee Mackintosh), the French and Belgian Art Nouveau,  and Byzantium. Additionally, some of the artists went on to be associated with developing movements such as Modernism and Expressionism.

Egon Schiele, Self Portrait with Hands on Chest, 1910. 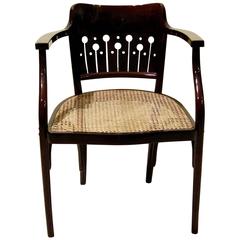 The Secessionists believed in the equality of all forms of arts and crafts and sought to unite both in the Gesamtkunstwerk – total work of art. They rejected the increased industrialisation of the nineteenth century, and promoted a return to craftsmanship and handwork.

The End of the Vienna Secession

The end of the movement in 1905 is marked by a separation of its members, as the so-called ‘Klimt Group’ fractured off. Now divided, the remaining Secessionists lacked the cohesion and initial spirit of artistic pluralism. The group would continue to produce exhibitions, but were not of the same quality and impact as before.

Whilst the Secessionists were only united for a period of 8 years, their impact on the cultural life of Vienna and indeed Europe, was incredibly significant. Essentially, their decision to break away from the academic art institutions and traditional art in favour of the ‘new’ and ‘young style’ cannot be understated.

Get the Look with Nicholas Wells Antiques: